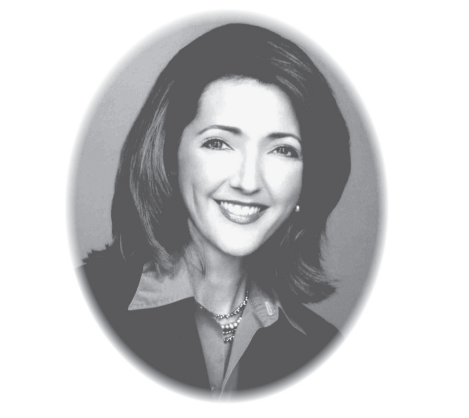 Christine Kapostasy Jansing was an Emmy-award winning journalist who reported for newspapers, radio, and television. After 17 years in local television news, she began a national career with NBC in 1998 as an anchor and correspondent for NBC Nightly News, the Today Show, Dateline, and MSNBC. She traveled extensively to cover major national and international stories including 9/11, presidential and papal elections, political conventions, shuttle missions, the Middle East conflict and Olympic games. Chris has been honored by both the New York and Vermont state legislatures, and had a scholarship established in her name at the College of St. Rose. She has received numerous community service awards, particularly for her work with children’s charities. She graduated with honors from Otterbein College in Westerville, Ohio, and was given an Outstanding Alumni award. Chris was also awarded an honorary doctorate by Union College.
Interview with Christine Jansing
1.) What did you experience at Fairport?
“Fairport is home, and learning there, cheering on the Skippers there, growing up with the same friends throughout grade school and high school were all wonderful experiences. I haven't lived in Fairport since college but it always makes me happy to come back. My brother David lives across the street from FHS so I'm reminded of high school every time I visit.”
2.) How long did you attend Fairport?
“My freshman year I went to Lake Catholic and then transferred to FHS. I graduated two years later, combining my junior and senior years.”
3.) In what ways did attending Fairport impact your life?
“A great education lays the groundwork for everything that follows. Having small classes meant a lot of individual attention. I was also able to get a broad range of experience by participating in sports, various clubs, drama, and music.”
4.) What is it like being a journalist?
“Journalism is witnessing history as it unfolds. In just the past five years, I've traveled to nearly 30 countries. And last year alone, I was in more than two dozen states, and getting to North and South Dakota meant that I have now been to all 50 states! For more than two years, I worked at the White House. I've covered stories from 9/11 and Newtown to a royal wedding and two papal conclaves plus eight Olympics! I've interviewed Presidents and Prime Ministers, Nobel Peace Prize winners and movie stars. The places I've gone, people I've met and stories I've covered make this, in my opinion, one of the most challenging yet fascinating jobs in the world.”
5.) What was it like covering the 9/11 attacks?
“When 9/11 happened, I was on the air, anchoring for MSNBC. America had been attacked, but so had my adopted hometown, because I was living in New York. It remains one of a handful of stories where it was very difficult to maintain my composure on the air. 9/11 remains a turning point in our nation's history but what I'll always remember are the hundreds of people who came to New York to help. I'll remember how the city bounced back. And I'll be forever grateful that so many Americans as well as foreigners stood up in the face of terror and started visiting New York again very soon after.”
6.) What inspired you to become a journalist?
“My dad, who had just a 9th grade education, was one of the most avid consumers of news I've ever known. As kids my brothers and sisters and I delivered newspapers and we got many newspapers delivered to us on King Street. We watched the evening news every night, because there was no cable then! I didn't go to college to become a journalist but a chance opportunity at the radio station's news department changed my life forever, and I graduated with a degree in broadcast journalism.”
7.) What is the one accomplishment that you are most proud of?
“Professionally, I'm still a bit astonished that I became the Senior White House Correspondent for NBC News as well as a national news anchor. Those accomplishments exceed my wildest dreams. It's really important to say that I couldn't have done it alone -- not even close. My amazing family has been incredibly supportive from the time I was a news reporter at a tiny radio station in Ticonderoga, NY. My friends are there for me through the exhaustion and they never complain about how many things I cancel because something has come up at work. And I'm very blessed that my colleagues are such smart, hard-working, dedicated people.”
8.) What motivates you most in life?
“I hope my mom and dad are looking down and saying, "We raised a good daughter". I want them, and my family and friends, to be proud of the work I do. And as a Catholic, I believe we need to make the most of whatever gifts we're given. So I strive to be a better journalist and a better person every day.”
9.) What do you most and least like about being a journalist?
“I love getting to travel and meeting so many people. The hardest part is missing important events in family and friends' lives. And sleep! I miss having a regular schedule and getting enough sleep!”
10.) What careers could you see yourself pursuing other than journalism?
“I never know how to answer that question. I love what I do so much, I can't imagine doing anything else.”
About the Interviewer: My name is Jaidin Knipp. I am an eighth grader at Fairport. I have attended Fairport Harding High since 6th grade.