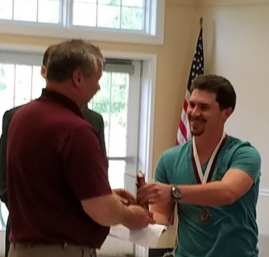 My last four years at Fairport have forever changed my life. I have met so many people and friends that will be in my life until the day I die. This school is not just a school to me, but it's a home. I have accomplished things in my life that I never would have thought were possible. A lot of my success and all of my achievements are because of Mr. Messer. Mr. Messer has always believed in my capabilities whether it was in his classroom or on the field. At the beginning of my sophomore year, he saw just how talented of a football player I was. I was only 160 pounds my sophomore year. Mr. Messer came up to me and asked me to play offensive line because the team needed me. Little did I know how much of a challenge it was going to be, going up against other players that are 230 pounds or more. He told me once on Saturday morning when we were watching film, "Do you see how hard this young man is working?" When he told me that, it gave me confidence like no other. He has always given me the hardest challenges because he knows that I can persevere. He didn't just challenge me on the field, but in his classroom as well. I walked into his Physics class the first day of junior year. I go up to his desk and he looks at me with a straight face and says, "You have three options, you can take Modern physics, modern physics, or modern physics". Modern physics is the advanced college level physics class he teaches. I remember one day I could not figure out this problem and nothing seemed to work. I went to Mr. Messer for help, and he helped me, just not the way that I imagined. He made me write the problem out on his board, and told me to solve it. So once again I tried. About 10 minutes goes by and I made a mistake and he told me to erase it and start over. And I had to start over every time I made a mistake. Long story short, we worked on this problem for two and a half hours. I didn't understand why he kept making me do it over again so many times. But once I figured that problem out, I had so much confidence in myself. Mr. Messer has pushed me to do things that I didn't think that I could. Because of the challenges that he has given me and I have been able to overcome, he has made me a great leader. And it's a life lesson that I could not have taught myself. He has helped me turn into the hardworking young man that I am today. Thank you, Mr. Messer for being so inspiring to me and being the person that you are.