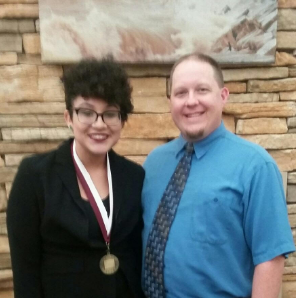 The teacher I have written about I have known just about my whole life, first entering his class back in 1st grade. Mr. Ruzin has always been an influential part of my music career and I cannot thank him enough for how much he has helped and guided me over the past 12 years. I began loving music in kindergarten with the gift of my Leapster Leappad Learning System, with book and touch pen. I would frequent the orchestra page, listening to the isolated piccolo play Stars and Stripes Forever over and over, ever since then I had always dreamed of playing it myself. I remember looking forward to going down to the basement of McKinley Elementary every week to sec what we would listen to, watch, or what instruments we would be playing that week. As 1 got older the music got more complex and once I was in fifth grade I would finally get to start playing in the band. I had fallen in love with the flute the first time I had played, although I admit I wasn't any good in the start, but never the less Mr. Ruzin saw potential in me. I remember going into the middle school and looking forward to D block because it was the only class I had that I really enjoyed because not only was band fun, but it was also a constant challenge. Through band, I met some of my closest friends and had so many great opportunities. Over the last 6 years I became so close to my classmates we began to think of ourselves as more of a family. Gabby and I had even made us a family tree, with Ruzin's name placed at the very top. Mr. Ruzin looks out for us all and cares for us as if we were family, always being there to talk to or ask for help if we need it. During my first few years in the high school band I'm unsure how long I made him sit with me after school practicing the blue book, just to be sure I had everything down, but I can assure you it was quite a bit of time. Some of my best memories from high school were made possible by Mr. Ruzin like our band camp water fights and ice cream parties, driving to Disney and back twice, and long conversations about figuring out the time signatures in Radiohead's infamous 'Pyramid Song" and card games. Band was not all fun and games though. Marching band has taught me a lot about discipline and dedication. I always saw band camp as the start of my school year, spending 8 long hours a day in the hot August sun preparing our first show for the upcoming season. A lot more work goes into those 10 minutes we get on the field. We're talking sore for the next like month work, but it was always worth it, to see and hear it all come to life. Mr. Ruzin was always able to make learning the shows fun and by the end of the week, we were able to run the show like it was second nature to us. As the years went by I found myself loving band camp more and more, to the point that the thought of not going this year makes me quite sad. Although the work was tiring, it was always so rewarding seeing what we were capable of and kicking off the new marching season. The band program is something I will miss dearly after I move, because my time in band will always hold a special place in my heart so for that Mr. Ruzin I thank you. You gave me the courage and inspiration to not only become a musician that I am today, but to want to pursue music in the future as well. As the years go by our band has been getting better and better, and I have no doubt that growth will continue. I am very excited to see what the future brings for the FHS band, and I am endlessly proud to have been a part of your band Mr. Ruzin.